The S&P 500 Index slumped the most since February and bond yields jumped after a report showed inflation rose more than forecast, adding to concern that price pressures will stifle a recovery in the world’s biggest economy.

The technology sector continued to lead the retreat in equities, with Apple and Microsoft pacing a 2.6% decline in the Nasdaq 100. Cathie Wood’s ARK Innovation ETF resumed its slide, bringing this year’s loss to about 18%. After closing at a record high on Friday, the benchmark S&P 500 dropped 2.14%. Energy was the only one of the 11 industry sectors to finish in the green. Treasury yields surged the most since March.

The debate over whether inflation will be persistent enough to force the Federal Reserve to tighten policy sooner than current guidance suggests comes as abundant stimulus has powered a rally in global equities, raising concerns valuations had become expensive. Fed Vice Chair Richard Clarida said he was surprised by the rise in consumer prices and “we would not hesitate to act” to bring inflation down to its goals if needed.

The consumer price index increased 0.8% from the prior month after a 0.6% gain in March. Excluding the volatile food and energy components, the so-called core CPI rose 0.9% from March.

Elsewhere, the claim among advocates that Bitcoin is an inflation hedge appears to be in question after the CPI report. The digital asset slumped as much as 5.8% to around $53,600. 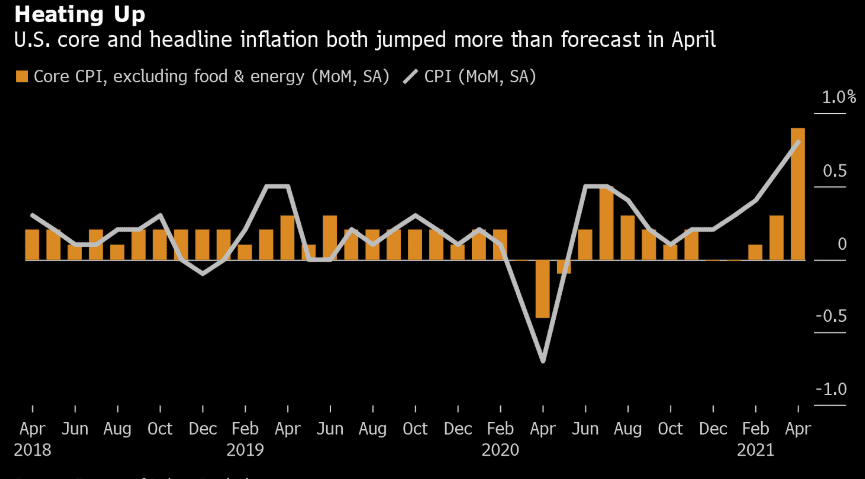 The dollar advanced against its Group of 10 currency peers and 10-year Treasury yields surged after a report showed U.S. prices climbed in April by the most since 2009, testing the Federal Reserve’s message that accelerating inflation will prove transitory.

The Australian and New Zealand dollars fell the most among G-10 currencies as wider risk-off sentiment offset the exuberance in commodity markets. AUD/USD fell 1.4% to 0.7736, after dropping as much as 1.5% earlier, the most since March. The Aussie fell versus most major currencies as long positions taken prior to the government’s stimulatory budget were cut, according to Asia-based FX traders. NZD/USD slid 1.5% to 0.7164; pair earlier fell as much as 1.7%, the most since March. 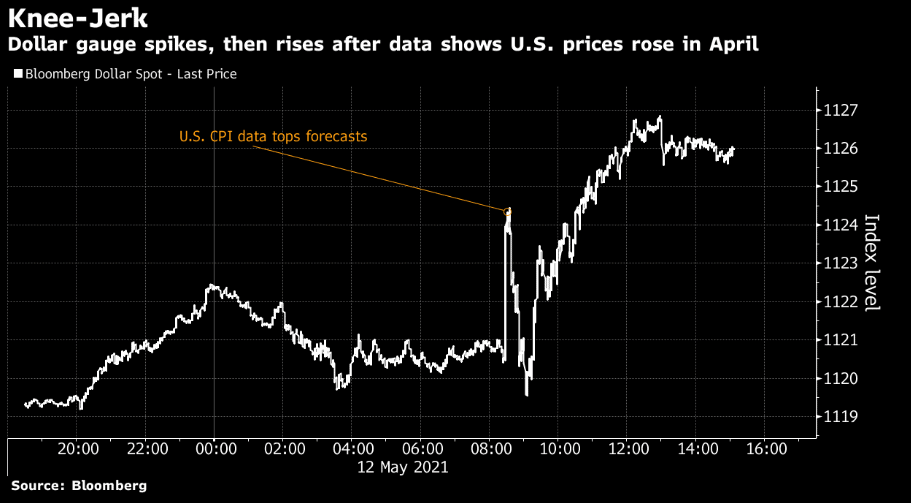 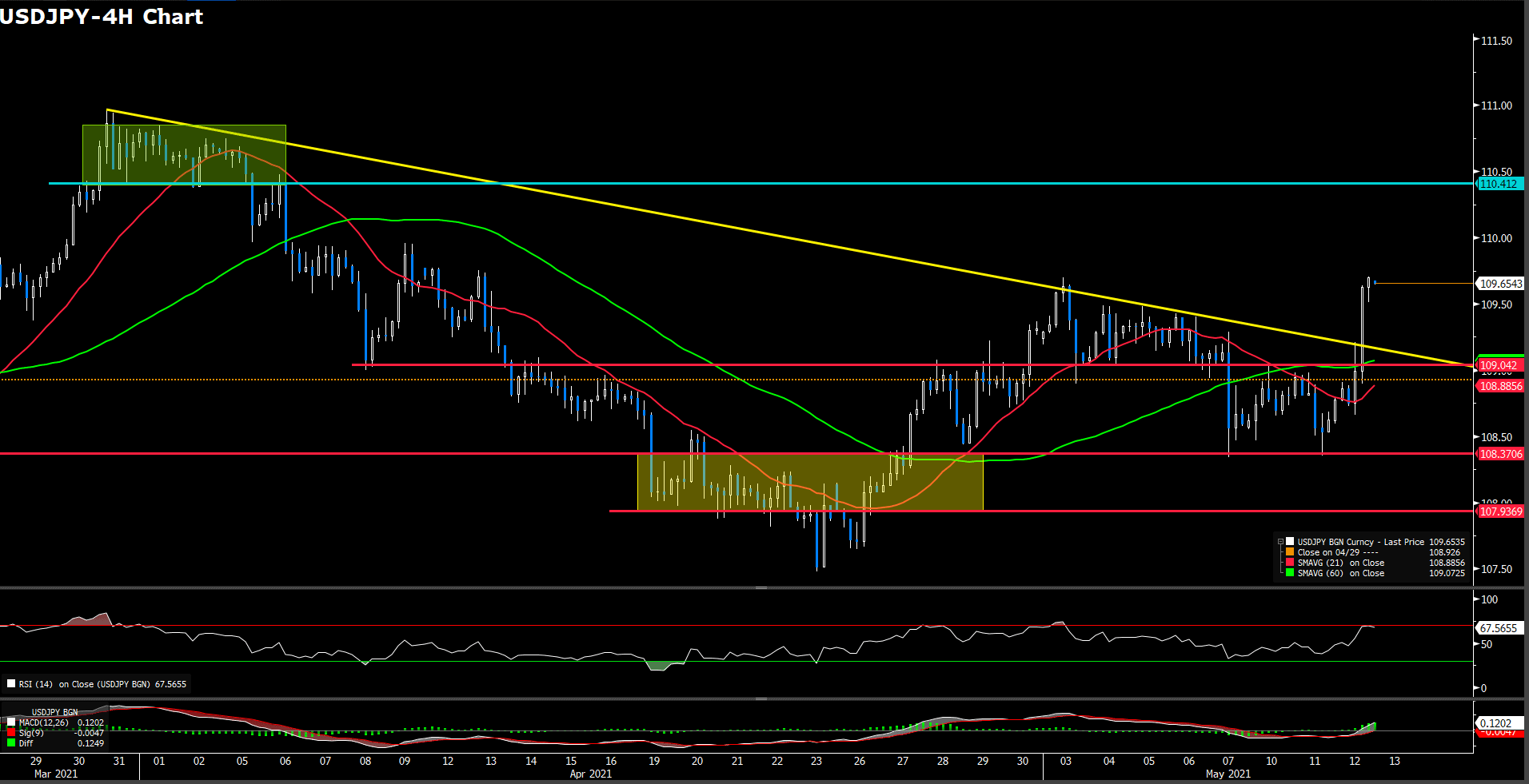 On price action, it’s obviously that yen has penetrated a downside resistance as yellow line in the char, moreover, price position has breached the last time high. Thence, we foresee market could challenge first resistance at 110 level if market could retain upside momentum. Meanwhile, U.S. 10 years Treasuries yields could also driven the yen direction with positive correlation in further market. 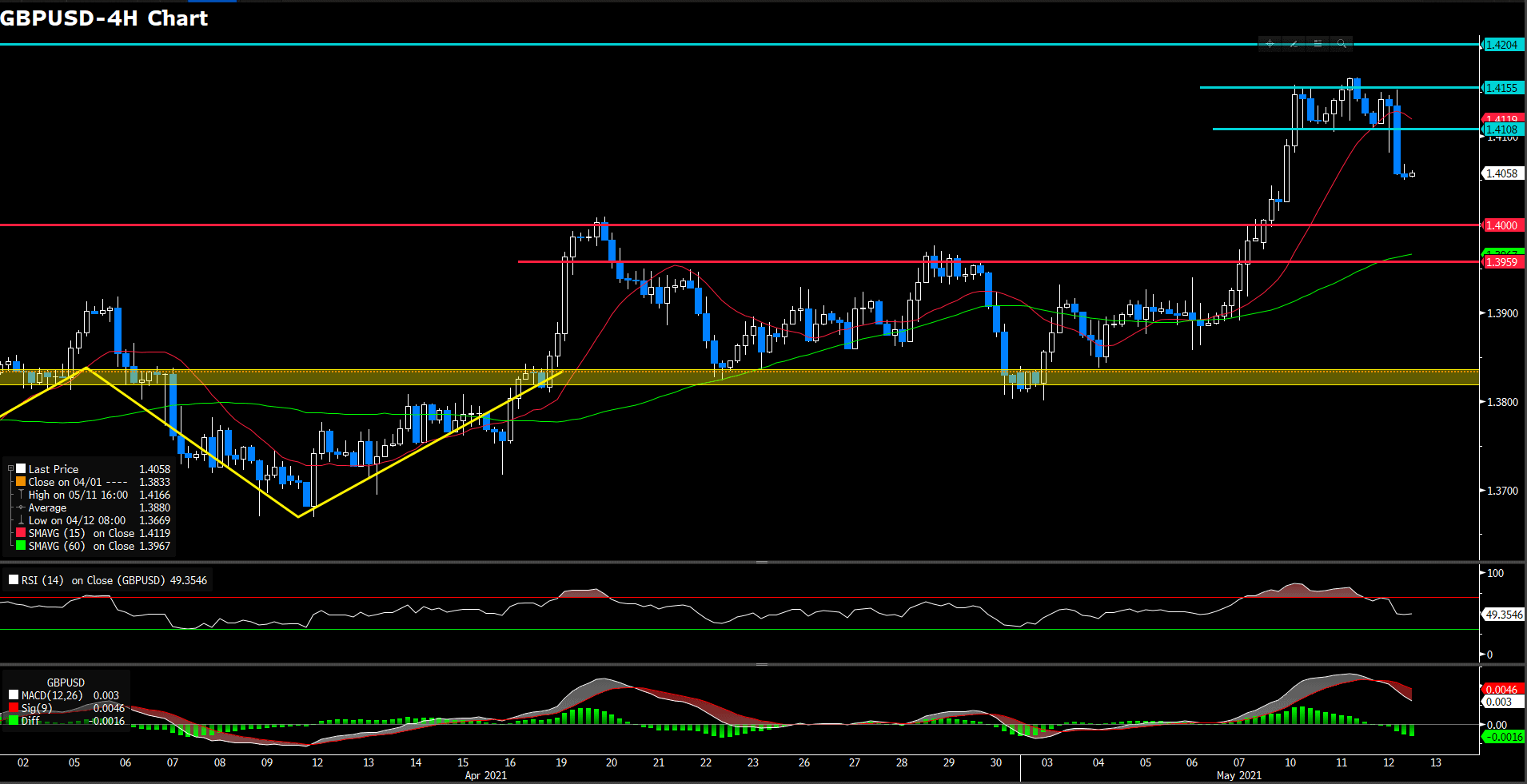 -1.5%, fueled volatility. In the day market, sterling traded lower stage with loss 0.63% while trading at 1.40533 as of writing. For RSI side, indicator shows 49 figure, suggesting a neutral momentum at this stage. On the other hands, 15-long SMA indicator turn it slope to the south side after hard striked in the day and 60-long SMA indicator remaining a teeny-tiny ascending movement.

Overall the market move in day, sterling slipped which seems affected by risk-off mode that propel greenback demand. Moreover, it also digest strss of over bought sentiment in short term. For long perspective, we still optimistic for gain traction ahead if any correction could be defend before the neckline level on 1.4. 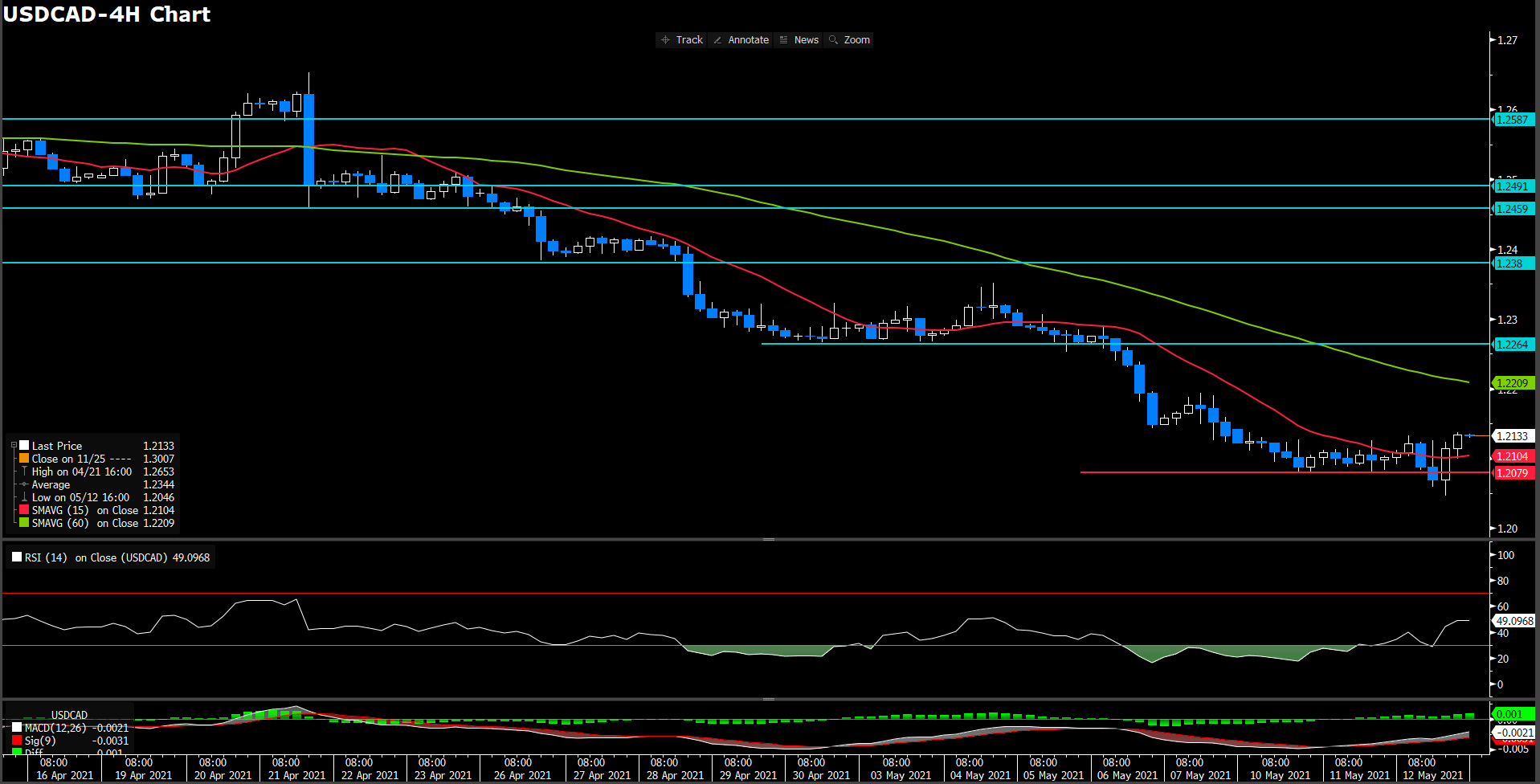 Loonie bounced up after reaching the lowest intraday level since 2015, trading at 1.21284 with 0.23% gains in the day. The U.S. 10 years Treasuries yields jumped to 1.695%, reaching the highest level in the month and challenged last time peak at 1.762% while global share market plummet. Meantime, WTI crude oil boost with nearly 0.6% in the day, industrial material wide-ranging retreat it upside traction as greenback climbed. For RSI side, indicator bounced back from over sought territory to 49 threholds where suggest a neutral momentum at current stage. For moving average side, 15-long SMA indicator turrn slope to acending way and 60-long SMAs indicator remaining it descending movement.

As we mentioned yesterday, loonie set a comfort support level as price cluster at 1.2079 around and day market has bounced up to recently-day high after testing the support level. We expect loonie is on the way of correction of downside traction in the short-run that kept a lid on rapidly appreciation stress in recently.